Secretary General
Posted by Unknown at 20:44 No comments:

CHQ HAS TAKEN UP THE CASE RELATED TO CBS ISSUES WITH THE SECRETARY POSTS, NEW DELHI 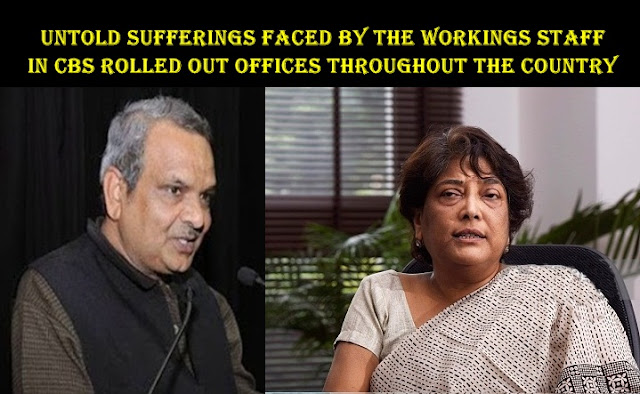 Sub: - Untold sufferings faced by the workings staff in CBS rolled out offices throughout the Country – Immediate and personal intervention is requested– Reg.

A kind attention is invited to our earlier references on the subject, wherein the problems mentioned therein are almost unaddressed till date. It is a known fact that CBS migration is undergoing in large no. of offices in many Circles. Till time more than 5000 offices are rolled out to CBS, because of the pressure applied by the  Department in  haste.  Because of such a fast approach, the end users   at the Counter area are affected badly, and the public also suffering a lot.

Whereas in Banking Sector, when such migration is undertaken, it has been carried out in a phased manner for eg. in SBI, the leader in Banking sector, migration was made only in 100 branches at the  first year.

You may aware that the staff are struggling with outdated computers and peripherals, which were purchased during  the  year 2000 to 2005 and no funding is  made so far to replace them  till date and as a whole the  Department  is  surviving with very old hardwares. Even proper up gradation of CPU is not made in many areas and the Software loaded is upto Windows XP, almost in most of the offices. Finacle can be  loaded only with Windows 7 and  hence  the  officers at ground level are  pressurized to use pirated version of Windows 7, which is  totally illegal and  leads to  legal litigation from  Microsoft. The staff are compelled to work in the outdated mode with pirated software, resulting in non operation.

The MOU made with M/s Sify, for net work integration is limiting to low bandwidth such as 128 Kbps to 256 Kbps in single and double handed offices, and 256 kbps to 512 kbps in ‘A’ class to LSG offices resulting in sluggish connectivity and takes hours together to transform the data. This results in hang over and the transactions could not be able to be made at the instant, as the Department expects. It requires at least 1 to 4 Mbps and M/s Sify refused to increase the bandwidth now.
End of day process cannot be made after validation/supervisor verification and the staff has to wait for the nod from the Infosys, even after midnights on several days and at times it can be made on the next day morning.  Even the women employees are compelled to   complete the EOD process in midnights and their husbands or wards waiting till midnights to carry home. They could not attend even their family, personal and social obligations, resulting in loss of mental balance, family problems, stress and social problems. There is no safety and security for the women employees leaving the office by late nights, especially in rural areas, where there is no transportation available. It is our responsibility to ensure the safety and security of the women employees and no untoward incident should be allowed to happen as in case of Jyoti Singh Pandey of New Delhi.

Even the Help desk provided is not answering and the end users are taken to task  and  receiving brick bats from the irate public.  This results in  closing of  accounts in large numbers  that too,  can be made  not on the  date of presentation but  after few days  and  our  Department  looses  large  chunk of customers, because of the miscalculations, wrong estimations  and over ambitious stand of the  bureaucrats.

Consequent to the increase in large number of Post Offices on CBS, it was observed for the past two months that the Data Centre Closure process is executed during day time that too during peak Counter hours. This results in slow accessibility of Finacle throughout the country. Irrespective of bandwidth, the  Finacle slowness has been experienced in all Post Offices in the recent past. This affects the public services very badly during the peak hour viz.from 11.00 am  to  03.00 pm on daily basis.

Furher, due to Finacle slowness, the most affected operation is the Cheque Clearing operations.  The Clearance House sends the images of the cheques to the Head Offices at around 08.00 am in the morning. The onus of furnishing the information pertaining to Bounced Cheques, that too before 11 am to the clearing house, lies on the respective Head Offices.  If the information pertaining to Bounced Cheques is not received before 11.00 am from the concerned HOs, the entire amount of Inward Clearance cheques are deemed to be CLEARED by  the clearance house.  This leads to encashment of bounced cheques, the  responsibility of which lies  on the shoulder of the  poor officials and they have to face contributory negligence  recoveries.

Since from the day of the first migration, the staff unions are complaining about the deficiency in services provided my M/S Infosys Ltd, especially facing enormous problems in the Finacle Software, besides bandwidth, net work, transmission and Server problems. On each and every occasion or from the day we are complaining at all levels, there is one word reply that, everything will be set right and put into rails one by one as this is only a transition period and everybody should bear with, in the interest of the Department. This is the saying mooted out and spread everywhere, from top to bottom.  Now the 2 years Contract period for total the implementation is nearing completion and there is no sign of improvement and the problems persist and aggravate everywhere. It is most unfortunate to mention that we are all bearing with all these hardships and sufferings, in the interest of M/S Infosys.

Because of all these deficiencies the Department not only losing  the  customers, besides there is  huge loss of man days and  due to non operation  there is huge loss of  money. This should be compensated with. There is a penalty clause in the Contract for deficiency in service. Instead of pulling the poor ground level officials, the application of penalty clause may perhaps be considered and applied on the service providers viz. Ms. Infosys and M/s Sify. It is reported that India Post has undertaken the project for switching over to  Core Banking Solution  platform with a total project outlay of Rs. 800 crores.  Hence, in the interest of the Department, we request the Secretary Posts to pursue with, on the direction, in order to pull the vendor and to save the customer services, the image of the Department and the public money.

Based on the above, our  Union  requests  the  Secretary Posts

i) to stop  such unmindful migrations into  CBS/CIS  immediately till settlement of the problems reported ;

iii) to improve the bandwidth  of sify network   atleast to the  level of  512 kbps in single handed offices and to the level of  4Mbps in Head Post offices ;

iv) to centralize the EOD process at CPC  level  in all circles and to relieve the official at ground level
after  completion of validation process , without  late night detention ;

v) to centralize the cheque clearance work  at  CPC  level, since  it is  now under  CBS ;

vi)  to ensure  the operation of  CBS  without  interruption/slowness during  peak hours  to cater  the  need of the  common public . 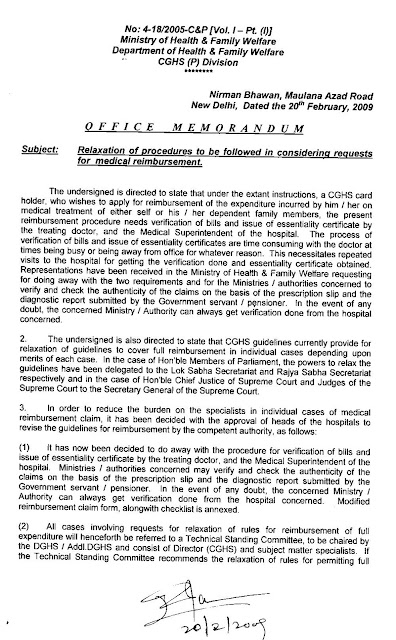 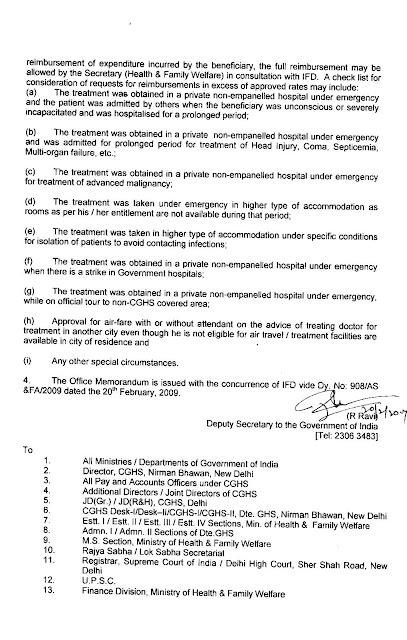 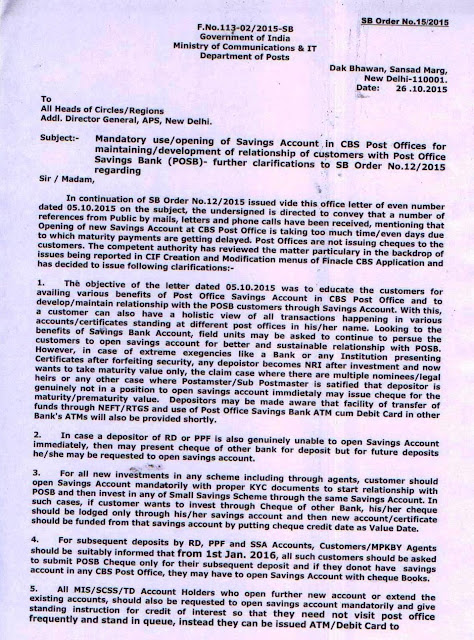 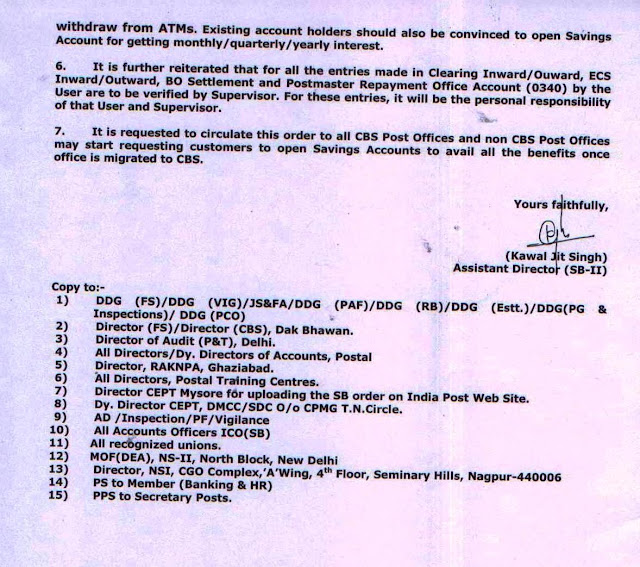 A.PALANISAMY
Posted by Unknown at 21:14 No comments: 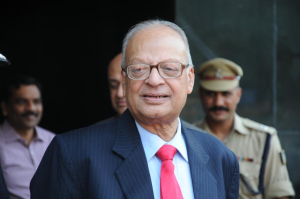 New Delhi: Seventh Pay Commission Faces Serious Challenge In Submitting Its Recommendation To Government Till December For Hiking Salaries And Allowances For Central Government Employees As The Employees’ Unions Test Its Account Of Controversial Pay Gap Between Top And Bottom Level Government Officials.

The previous pay commission showed a wide gap in pay between the top bureaucrats and the government employees at the bottom.

Subsequent pay commissions reduced the ratio of pay between lowest earning employees and top bureaucrats from 1:41 in 1947 to about 1:12 in 2006. The minimum basic salary of central government employees is now Rs 7730 while maximum salary at the level of Secretary is Rs 80,000.

Accordingly, the Seventh Pay Commission will have to consider reduction in the disparity of pay ratio between its highest and lowest paid employees because it determines the socialism view of the government and the higher number of central government employees are in the minimum pay slabs.

The pay gap increases employee’s turnover and work-related illness, with all the associated economic consequences.

The bureaucrats with high pay are generally happier, healthier and a better place to live for almost everyone in them compare to the lower earning employees.

The Seventh Pay Commission, headed by Justice Ashok Kumar Mathur was appointed in February 2014 and its recommendations are scheduled to take effect from January 1, 2016.

As part of the exercise, the Seventh Pay Commission holds discussions with various stakeholders, including organisations, federations, and groups representing civil employees as well as defence services.

The Commission is ready with its recommendations on revising emoluments for nearly 50 lakh central government employees and 55 lakh pensioners, and will submit report to the Finance Minister till December 31.
Posted by Unknown at 23:06 No comments:

World Postal Day happens each year on October 9, commemorating the date for the establishment of Universal Postal Union (UPU) in 1874 in Bern, Switzerland. The UPU was the start of global communication revolution, allowing people could write to others all over the world. October 9th was first declared World Postal Day at the 1969 UPU Congress in Tokyo, Japan. Since then, World Post Day has been celebrated all over the world to highlight the importance of the postal services.
The Postal Services is under the Department of Posts, which is part of the Ministry of Communications and Information Technology of the Govt of India. The apex body of the department is the Postal Service Board, consisting of a chair and six members. The six board members govern personnel, operations, technology, Postal Life Insurance, Human Resource Development (HRD) and planning. The joint secretary and financial adviser is also a permanent invitee.
India has been divided into 22 postal circles, each circle headed by a chief Postmaster General. Each circle is divided into regions, headed by a Postmaster General and comprising field units known as divisions (headed by SSPOs and SPOs). These divisions are further divided into sub divisions, headed by ASPs and IPOs. Other functional units (such as circle stamp depots, postal store depots and mail motor service) may exist in the circles and regions. In addition to the 22 circles, there is a base circle to provide postal services to the Armed Forces of India. The base circle is headed by a Director General, Army Postal Service (with a rank of Major General).
The highest Post Office in the world is Hikkim, Himachal Pradesh, India at a height of 15,500 ft (4700m) (postal code-172114).
The first adhesive postage stamp in Asia were issued in the Indian district of Scinde in July 1852 by Bartle Frere chief Commissioner of the region. Frere was an admirer of Rowland Hill, the English postal reformer who had introduced the Penny Post. The Scinde stamps became known as “Scinde Dawks”, ‘Dawk’ is the Anglicized spelling of the Hindustani word Dak or (‘post’). These stamps with a value of ½ anna, were in use until june 1866. The first all India stamps were issued on 01 October 1854.