Chairman informed that he had recommended for payment of bonus to GDS at the enhanced calculation ceiling of Rs. 7000/- and the file is returned to Postal Board.

(Last time Nataraja Murthy Committee has recommended that GDS should not be paid enhanced bonus and their bonus should be reduced to 50% of the departmental employees).

Now that, GDS committee has recommended Rs.7000/-, Postal JCA has demanded Postal Board to issue bonus orders of GDS with calculation ceiling of 7000/- without any further delay.
Posted by Unknown at 03:14 No comments:

Sub: Proposal for the implementation of Cadre Restructuring

I take this opportunity to suggest the following towards the implementation of the proposed Cadre restructuring in Group C, in our circle.

2.           The main aim of our union should be to protect the interest of our staff, especially dislocation of staff. The majority of the staff will have no monetary benefits, as they may be in receipt of the respective grade pay.  If at all any dislocation is absolutely necessary, it should be within the division only.

3.           After the identification of the posts in all cadres as per the decided norms, the posts should be distributed to the divisions, so that the posts are to be filled up by the concerned SP/SSP. Then only the dislocation will be minimum.

4.           Against the available posts allotted to the division, the posts are to be filled by the officials as per their seniority in the divisional gradation list, starting from the senior most official. This will ensure the further promotion of the senior officials, when an opportunity comes. The rest of the officials of the same grade pay, who cannot be accommodated in posts, should be allowed to be continue in their present posts.

6.           For example, if the number of LSG posts allotted to our division is 50 and the number of officials available in Grade pay 2800 is 45, the officials in GP 2800 will be posted against the 45 posts. The senior most 5 P.A.s in GP 2400 will be elevated to GP 2800 and will be posted against the resultant 5 vacancies, within the division. In this case the 5 officials may opt for this, since their posting is within the division. If the allocation of posts to the division is not done, those officials will have to go to other divisions, in which case there are chances for the officials to decline this. This may lead to the denial of further promotions under MACPS.

7.           On the other hand, if the LSG posts allotted is 45 and the number of officials in GP 2800 is 50, then the senior most 45 officials would be posted in the 45 posts, and the remaining officials should be allowed to continue in their present posts.

8.           I suggest the following towards the identification of posts and posting of officials.

9.           The total number of HSG (NFG) is 26 which are to be created. There are 24 officials in regular HSG I cadre who have completed 2 years of service and due to be elevated to HSG (NFG). All the posts at which those 24 officials are presently working may be identified as HSG (NFG) and the officials may be allowed to be continue in their present post. This has been done in Orissa circle.

10.         For HSG I, the total number of posts after cadre restructuring is 238. The number of posts already available in HSG I is 141. As suggested, out of 103 available in HSG II posts 97 posts can be upgraded to HSG, which makes the total of 238. The officials already working in regular HSG I cadre may be allowed to continue in their posts. The remaining posts should be distributed to divisions as already suggested. In divisions, the posts may be filled by the senior most officials in the GP of 4600, and in the event of shortage of officials in GP 4600, the senior most officials in GP 4200 may be elevated to the GP 4600 at divisional level.  One post in each HO can be identified for HSG I, besides the existing one, which may give the required shortfall of 97 posts, as there are more than 100 H.O.s in the circle. The post of In-charge, BPC may also be considered for HSG I.

13.         It should be noted that all posts in HSG I/HSG II/LSG/single handed/double handed/triple handed are available in all divisions almost evenly distributed. The posts are to be identified in LSG. If the posts mentioned in para 12 supra are identified for LSG, those posts are also available in all divisions, which will be evenly distributed. In this case, the dislocation will be minimum.

14.         The above proposal may be discussed in length at the meeting in Chennai and a final decision may be taken, keeping in mind that the posts are to be available in all divisions, and there is no dislocation beyond the division. Also it is to be noted that identification of posts within the division would be easy, since the gradation list for officials of all grade pay are maintained at divisional level only.

The Federal Secretariat meeting of NFPE was held at New Delhi on 27.09.2016 under the presidentship of Com. Giriraj Singh, President, NFPE. Representatives of all affiliated organisations attended the meeting. Com. M. Krishnan, Ex-Secretary General & Secretary General, Confederation also attended and guided the discussion and decisions. Com. R. N. Parashar, Secretary General, NFPE reported the non-grant of enhanced bonus to GDS and the efforts made by NFPE leadership to settle the issue. He also reported the non-settlement of payment of arrears to casual Labourers inspite of orders issued by Directorate. Com. Parashar, reported the details discussion he had with Shri. D. Theagarajan, Secretary General FNPO and placed the following proposal of PJCA before the Secretariat meeting.

1.      Phase programme of action culminating in two days nation wide strike on 9th & 10th November 2016 exclusively on the bonus demand of GDS and revision of wages of casual labourers.

Before commencement of the meeting, the National Secretariat paid respectful homage to Late Com. Des Raj Sharma, Ex-General Secretary, P-IV CHQ & Ex-Deputy Secretary General, NFPE. The Secretary General and all other participants mentioned about the unforgettable contributions made by Com. Des Raj Sharma and also his sufferings for strengthening P-4 Union, NFPE and Confederation. The National Secretariat expressed it heart-felt condolences and offered two minutes silence.

MINUTES OF THE MEETING WITH THE STAFF SIDE DT 20.9.2016 BY THE CPMG,TN ON CADRE RESTRUCTURING - MANY THINGS INROADED ON THIS ISSUE IN TN CIRCLE - THIS IS FIRST STEP - AWAIT FOR FURTHER STEPS

MINUTES OF THE MEETING WITH THE STAFF SIDE DT 20.9.2016 BY THE CPMG,TN ON CADRE RESTRUCTURING - MANY THINGS INROADED ON THIS ISSUE IN TN CIRCLE -  THIS IS  FIRST STEP - AWAIT FOR FURTHER STEPS 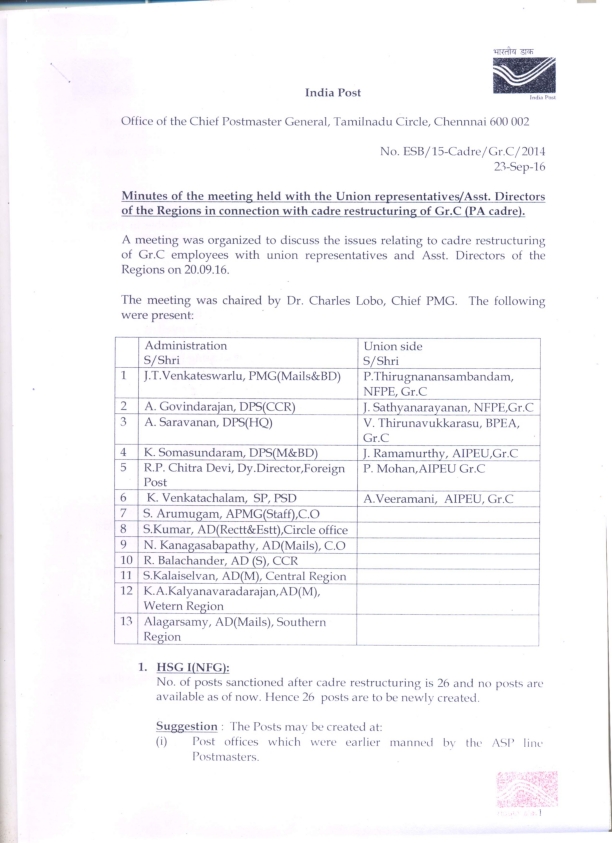 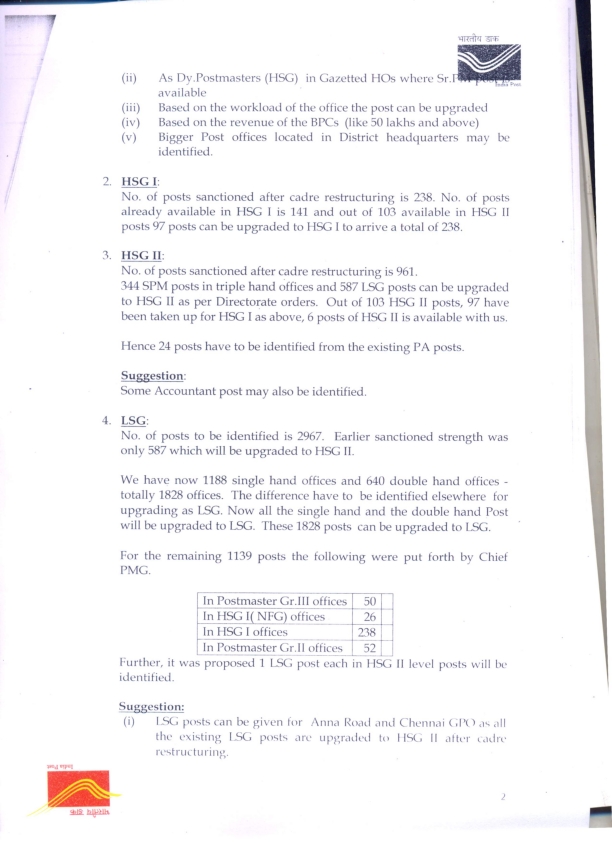 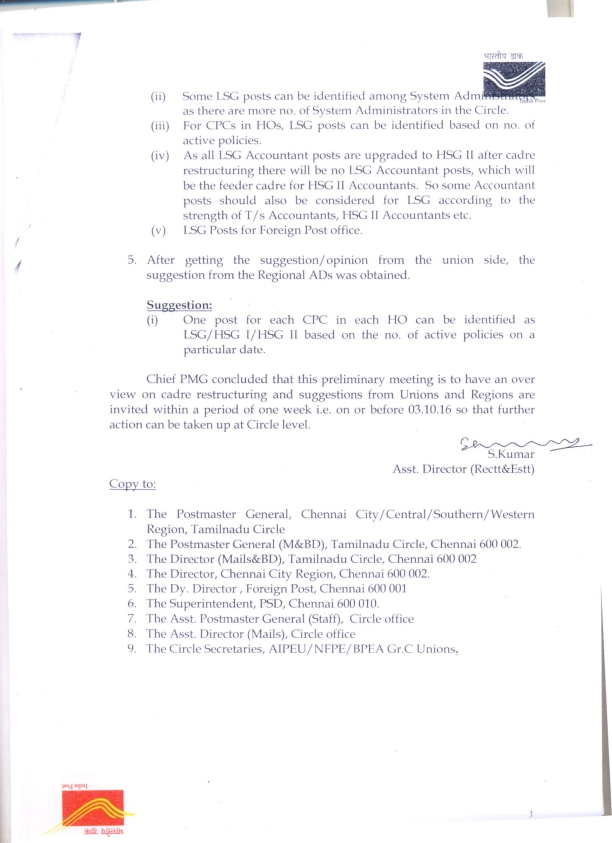 DIVISIONAL/BRANCH SECRETARIES MEETING PROPOSED ON 27.9.2016 AT EGMORE TO DISCUSS ON CADRE RESTRUCTURING IMPLEMENTATION 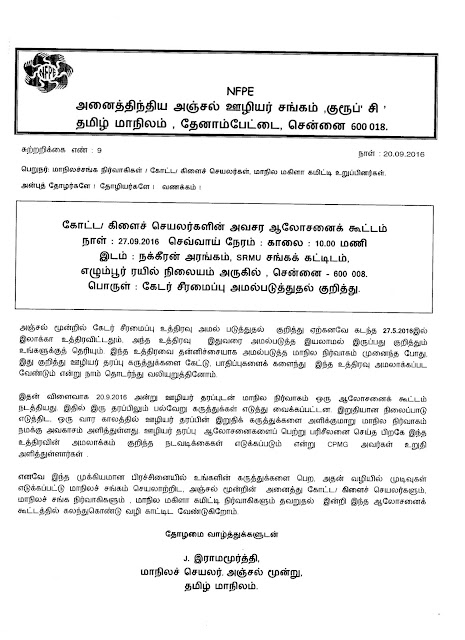